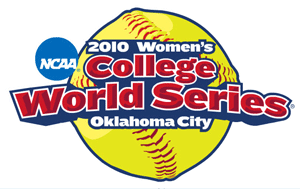 Think you know whose going to win this week at the WCWS? 8 Teams arrive in OKC but only one leaves crowned the National Champion. Find out what it takes to be THAT team!

Way back in January, 290 Division I softball teams started out the season with one goal – to make it to Oklahoma City and win the Women’s College World Series! For 282 of those teams their season is over but that dream is still alive for the remaining 8.

These 8 teams will arrive in OKC after having played a very long season and after battling through Regionals and Super Regionals. Some of those 8 have been on the road for almost 3 weeks and all of them are tired and banged up. But this is what they’ve all worked for and now the chance of a lifetime is before them.

So what will it take to come out victorious? As 2009 National Player of the Year, Danielle Lawrie said in her quote – it’s going to take a lot of fighting, pushing, scratching, clawing, sweating, kicking and screaming – and that’s from someone who most people consider the best pitcher in college softball! Imagine what all the others think it will take? What Danielle’s quote tells me is that she and all of her Huskie teammates are not assuming they will win. In fact, the only thing they are assuming is that they will outfight and outlast anyone they play. It’s kind of like Survivor on the ballfield; outwit, outlast, outplay.

So, want to know who I think will win the 2010 Women’s College World Series? I’m no Miss Cleo so I can’t predict the future and tell you exactly which team will win this year’s WCWS, but I can tell you what that team is going to do in order to win it.

Check out my list of things it will take to win this year’s 2010 Women’s College World Series:


Do you think you know who will win this year’s NCAA National Championship? Follow along either by watching on ESPN or the internet as history is ready to be made and the one thing we know for sure – someone will be crowned National Champion!