Without good timing all you are is a swinger, not a hitter. There are lots of reasons that hitter’s struggle with timing but more importantly, there are solutions. Discover a simple one here.

While swinging a bat is largely a physical skill, timing is a visual one. We have to match our swing with an oncoming ball, and that takes a tremendous amount of visual processing, isolating and predicting. When your hitter’s struggle with their timing what’s usually gotten messed up is that their focus has shifted – or their visual skills have gotten off track.

In dealing with tons of players of all ages I’ve learned that players don’t lack focus. In fact, most players, no matter how young they are, have tremendous focus. But, they don’t usually focus on the right thing. Big difference! So, when we simply tell them to “come on Cindy, you’ve got to focus!” we aren’t telling them anything that’s specific enough to help them.

Here’s what I mean. Kids of all ages get distracted. The younger they are, the easier it happens, but everyone gets distracted.  So let’s say your hitter is up and there’s a really good pitcher on the rubber. She’s really big and throws REALLY hard. Your hitter is swinging at almost everything and not getting close to hitting the ball. So naturally, we think she’s not focused, right? Clearly she’s not paying attention or else she’d be hitting the ball.

What I’ve learned is this kid is focusing a TON! She’s just not focusing on the right thing. Instead of focusing on picking up the ball so she can hit it, she’s focused on how HUGE the pitcher is, how fast she throws and how much it might hurt if she gets hit.

So as coaches, we have to teach our players how to focus, just like we teach them how to swing, or throw or pitch. I know, easier said than done, right? Well, I was recently faced with trying to help a player improve her focus so she could better pick up the ball from a faster pitcher and actually hit it. After a couple missed attempts, I came up with something that worked amazing, was simple

to practice and most importantly – got her hitting shots off fast pitching. Here’s what I did.

First, if you’ve ever thrown front toss to a hitter you know that most hitters watch you the whole time instead of actually shifting their eyes to follow the ball. Since the hitter is trying to hit the ball and not the pitcher, the hitter’s eyes must shift to the ball. But, what makes this difficult is that our eyes are attracted to movement, and the pitcher is doing all the moving. 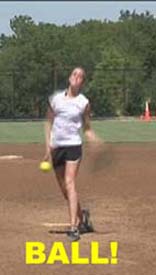 So, Step #1 – Help your hitters practice shifting their eyes from the pitcher to the ball. I’m not so concerned when they do it as much as I am that they do it. So, to practice this first step have your hitter drop her bat, pick up her glove and actually stand behind homeplate. A pitcher or someone who can throw underhand stands at least 20 feet in front of the hitter and pitches a ball underhand. The hitter (now with her glove on) will simply catch the ball. But, here’s the catch – when she feels her eyes shift from the pitcher to the ball, she needs to say “BALL!” out loud.

At first, she’ll say “Ball!” after it’s left the pitcher’s hand, so make sure she understands she isn’t waiting for the ball to come toward her, she’s simply saying “Ball!” when she feels her eyes shift away from watching the pitcher’s movements and she finds the ball itself.

Step #2 – After she gets the idea of saying BALL!, the next step is to say “NOW!” whenever the ball gets to a place between her and the pitcher when she knows where it will end up. Anybody who has ever caught a ball has

identified this exact point in time when they recognize where the ball will end up so they can move their glove there and catch it. It’s just that they’re never really thought about it before.

So now, have them practice saying “NOW!” when that pitched ball reaches a place when they know where it will end up.

Step #3 – Combine both the “BALL!” and “NOW!” commands on each pitch – still with your hitter simply catching pitched balls.

Step #4 – Once your hitter is good at this, then put the glove down, pick up the bat and have your hitter simply stand in the batters box and say those same 2 things; “BALL!” and “NOW!” – WITHOUT SWINGING THE BAT

Step #5 – When your hitter feels ready, have her think “BALL!” and “NOW!” but swing and hit the ball. You will be amazed at how well they do and how hard they hit the ball. Simply because you helped them learn what they should be focused on and when.

For more hitting drills, check out the following: