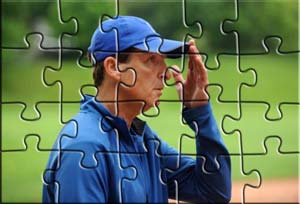 If your team seems to be missing your offensive signals on a regular basis (not just one player over and over) then try simplifying them. The easiest method to use, as far as simplicity goes, is called the Clap system. What makes it easier for your players is that the signals all come at the very beginning and involve counting claps (instead of following manic hand motions). So 1 clap could be bunt, 2 steal, 3 fake bunt or take, and 4 hit and run. Once you figure out what claps mean what then simply do your claps (giving your signal) followed by a series of complicated hand signals that mean nothing.