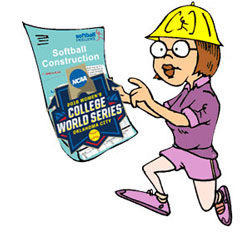 If you’re a softball coach then this was the best weekend of the year – or at least one of them! The Women’s College World Series is the pinnacle of softball, but could you coach there? Do you have what it takes to help your team successfully maneuver through the 8 team gauntlet?

All 8 teams in the WCWS are “living the dream” including all 8 head coaches. Whether they’ve been there before or not, there’s no place like Oklahoma City for the Women’s College World Series. See if you have what it takes to coach there.

Having a good enough team is only part of what it takes to make it to OKC. Lots of good teams didn’t make it, so luck, good breaks, healthy players and timely execution are just some of the reasons why Georgia, Florida State, Alabama, Auburn, UCLA, Michigan, Oklahoma, and LSU were the final 8. The best of the best. The ones to play for the national championship.

We all sat riveted watching games, arguing with calls, amazed at the incredible plays and let’s face it, questioning coaching decisions. But isn’t that our job as fans? To question and argue and amaze? But coaching there, in OKC takes much more.

If you’re ready to improve yourself and your coaching, then we’ve got your next step: