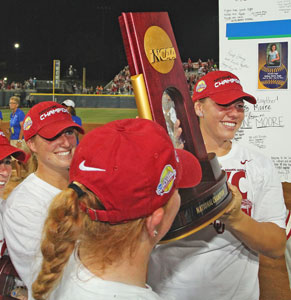 You knew I was going to write about this year’s Women’s College World Series, but instead of predicting who I think will win, I wanted to give you my 4 Other Take-Aways of Championship Teams.

Why call them the “other” take-aways, and what are they exactly? Read on to discover what makes softball teams win, other than the obvious.

OK, let’s state this right off the bat – great pitching and timely hitting win championships. Of course, nobody ever wins with lousy pitching and spotty hitting. But after watching almost every inning of every game in the Regionals, Super Regionals & WCWS I’ve come up with a more detailed list of 4 “Other” Take-Aways that make up championship teams.

These 4 things, on their own might seem OK, but none are so remarkable that they’ll make you think “wow, because of that they’re going to win it all!”. And yet collectively, each of these have a cumulative power that creates a force of its own.

These 4 things allow an LSU to hang on by its fingernails in Tallahassee and beat the #4 ranked Florida State. Or a Baylor team to not only beat an incredible Megan Good from James Madison, but the following weekend go into Tucson and beat the #2 team in the country! Or an Ole Miss to win the SEC tournament and advance to a Super Regionals. And, it’s why Oklahoma could somehow survive its incredibly tough Super Regional or a Washington to eventually eliminate a tremendous Utah team.

Sure, every team in OKC has extremely tough pitching and great hitters. But those are obvious. Those things are easy to point out and then dismiss as why they’re different than you, or why your team can’t play like that. But for every great pitcher who helped her team get to Oklahoma City, there’s another one who might still be crying from disappointment at not making it there. We can always work on our hitting and pitching, but in the meantime, here are 4 “other” things that you can focus on that will REALLY help improve your team: 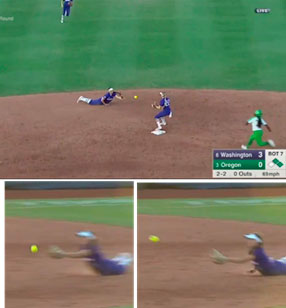 Defensive play takes time, it takes planning, it takes commitment and it takes emphasis. You can’t hit easy groundballs to your infield every practice for 3 months and then expect them to layout and make the  play of their life with your season on the line. Those kind of plays come with diligence and belief – your diligence in constantly stretching their defensive skills and their increased belief in those skills. Oregon might have beaten Washington in the bottom of the 7th in Game 3 of the WCWS if Ali Aguilar doesn’t dive up the middle, make an incredible stop, and an even more incredible glove toss to force the runner out at 2nd base. And while the pitch was incredible at 69 mph, the defense was even more incredible!

It’s an incredible feat for a group of individuals to come together and unite through a sport they love, that asks so much. For this group effort to rise to Championship levels, lots of factors are at play; Luck plays a part, as does momentum and sometimes things beyond your effort and control. But when a group of individuals can pull together and sacrifice all they have for the good of the team, and withstand the long, hard rigors that the softball season throws at you – when you can do that and come out the other end – then win or lose, you’re a champion!

For more help building your team into a championship team, check out our Vault Classic!

2 comments on “The 4 Other Take-Aways of Championship Teams”