Has your coach ever given you the bunt and you’ve wondered whether you should bunt to the left or the right side of the field?

Learn what to watch for so you can do better at the plate.

While hitting can seem really hard it helps to remember that the defense only has 9 players to cover a LOT of area – a whole lot of area!! The problem that the defense has is they have to make some hard choices. They’ve got to either cover an area on the field, or leave that area and cover a base. If we can figure out when the defense is going to leave a part of the field open and uncovered, or leave it early to cover a base – then we can hit the ball there.

So, to give yourself a better chance of getting a hit, I want to show you how to look at the defense and figure out where the defense is the weakest.  We’re going to look at 2 different defensive situations that involve a runner at 1st base.

In Picture 1 you can see a runner on 1st, and a big yellow circle on the right side of the infield. That’s to show the open space left by the 1st baseman who is playing back near 1st. This is important because it tells you 2 things:

Now, let’s look at another defense and see what we can learn from it. In Picture 2 you can see the Red arrow pointing to the runner at 1st, and the yellow arrows show that this time the 1st baseman and the 3rd baseman are both playing in. This tells us 2 things:

So what we see in Picture 2a, is the batter push bunting the ball to the SS and forcing her (the SS) to field the ball, which means can’t also cover 2nd base. The Red circle around 2nd base shows the base is wide open since the 2nd baseman had to cover 1st (since the 1st baseman was playing in), and the SS couldn’t cover 2nd base because she’s fielding the ball.

While this might all sound very complicated to read, hopefully the pictures make it easier to understand. Just remember that the defensive players must either field the ball or cover a base – they can’t do both! So use your knowledge of the defense to make them choose the wrong thing!!

For more help with defensive strategy, check out the following:

Hope is a wonderful thing, and it’s definitely what the start of every season is

Next
A Pitching Workout to Help Game Success 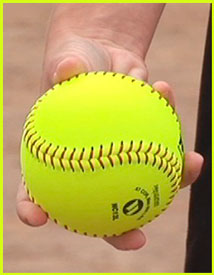 Know the 3 Must-Do’s Before Every Pitch