Every pitcher wants to get faster and yet most pitchers do it at the wrong part of their motion.

To increase your speed and be legal, master the push foot.

While a pitcher’s release must be the fastest part of her motion in order to put the greatest amount of speed on the ball as possible, this ending speed is the result of all the movements prior to it. In other words, movement is like a chain reaction – adding to itself in a cumulative, building effect. What a pitcher does at her release point, which is the end of her motion, is a result of what’s she’s built up to that point. Too many pitchers think they’ve got to create their speed at the end, causing a tense, rushed, and ineffective release.

Also, too many pitcher’s think only in terms of their arms when it comes to their speed. This is why you’ll see so many pitchers with a rushed, frantic arm action at the beginning of their motion followed by a strained and jerking movement at release. And yet, these pitchers aren’t happy with their speed, and aren’t realizing their speed capacity.

So is there anything these very typical, frantic pitchers can do to achieve their speed capacity while actually calming down their motion? Fortunately, the answer is yes, but it comes from an unlikely source.

A pitcher’s feet and legs, and more specifically, her push foot is the starting point for her eventual speed, as well as the key to her pitching legally. Commonly called the pivot foot, the “push foot” is the foot the pitcher places the most forward on the pitching rubber before she starts her motion. For right handers it’s the right foot and for lefties, it’s the left foot. The reason I don’t like the name “pivot foot” is because this whole notion of pivoting this foot results in a complete loss of power for that leg, causing the pitcher to lose half of her potential for speed.

This is also why pitchers tend to leap and double-plant (crowhop) since having their push foot turned sideways effectively deadens this leg drive forcing the pitcher to create speed by jumping or re-pushing. Picture 1 shows what the push foot facing forward (correct) and angled sideways (incorrect) looks like.

As I pointed out in a previous Insider article, How to Sprint Your Way to More Pitching Speed, we need to use our feet when we pitch the same way we use them when we run. That means we must point our toes, knees and hips in the direction we’re going, which sure isn’t happening if our front foot is pointing sideways.

Pitchers that turn their push foot sideways when they start their motions simply aren’t getting the powerful leg drive that pitcher’s get who keep their front foot facing forward. In order to help pitchers feel this front foot power source I’ve started using one of our hitting products –The Power Pod. This pod is a small rubber device that is extremely durable, lightweight, portable – and best of all – perfect for helping pitchers feel both the added power they get from keeping their push foot facing forward and using it to push off. It also gives the pitcher immediate feedback if they do happen to angle their front foot.

Here’s how it works…the pitcher places the Power Pod up against the pitching rubber under their push foot (lead foot on the rubber) as shown in Picture 2. Remember, the point of the pod is to help the pitcher use her push foot properly to PUSH herself forward into her stride. To do so, the pitcher needs to make sure that the ball of her foot will roll over the pod and end up on the far side of the pod (Picture 2 – Correct) instead of pushing on the side of the pod closest to the pitching rubber (Picture 2 – incorrect).

If the pitcher turns her push foot as she drives off the pod, her foot will then push sideways, not only resulting in a loss of power, but also kicking the pod off to the side as shown Picture 4. But if your pitcher keeps her push foot facing forward during her stride, then the pod will stay put and barely move as shown in Picture 3.

Once your pitcher gets her push foot to drive more she’ll definitely feel her feet moving faster – which means she’s got to speed up her hand in order to be on time with her hands and feet at release. This speeding-up-of-the-hand will cause your pitcher to throw faster. But keep in mind that pitchers, like everyone else, don’t like change. ANYTHING that feels different to them they think is wrong, which makes improvement difficult. Help your pitchers through this uncomfortable stage by letting them know that control isn’t important while they’re using the Power Pod. Instead, all you want them focusing on is pushing down into the pod with their push foot and using that power to transfer onto the ball at release.

For more help with this topic check out the following:

Disrupting Hitters with the Screwball and Backdoor Curve

Next
The Power of TEAM

The Power of TEAM 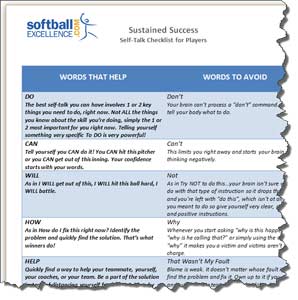