Pitchers face a sustainable success problem when they get the 1-5 hitters out, and then struggle with the 7,8,9 batters.

Knowing how to manage your mind and your success is crucial for any athlete.

I’ve had players write and tell me they had back to back outstanding games. That they were getting on base every at bat, generating RBI’s for their team, even hitting grand slams. And then suddenly they couldn’t hit anything.

Or from a pitching point of view, many pitchers tell me they will get the best hitters on the other team out; only to let the 7, 8, and 9 hitters get on base.

If any of this sounds familiar then you’re not alone; it happens to every player, at every level. And you’ll be glad to know the solution isn’t as difficult as you might think. Both of the scenarios I just mentioned have one thing in common; success followed by struggle. Both the hitter who did great on her first few at-bats only to struggle on her last one, and the pitcher who was able to get the really good hitters out only to let batters 7, 8 & 9 get on base had the same issue and that was “I was successful but now suddenly I’m not. What happened?”

Well, what happened was a switch you made mentally more than anything you did physically. Both the hitter and the pitcher in our example changed their focus. Whenever we have success in a game we often make the mistake of trying to have our next effort be even better than our last one. Instead of simply trying to have another good at-bat, the hitter that just hit the grand slam changed her focus and tried to hit another home run. That’s a lot of pressure she put on herself so it’s no wonder she didn’t do as well.

And the pitcher who got the other team’s best hitters out only to struggle with their 7,8 and 9 hitters – well her problem was she let up on her focus. Instead of keeping her focus the same as it was when she faced their better hitters, our pitcher probably lightened up a little on her focus thinking she was facing their weaker hitters.

Whenever we change our focus by either making it too strong or too weak, we change our comfort zone. We either start pressing or we start relaxing too much – either way we take ourselves to a place where we don’t go very often so of course we aren’t comfortable there, and as a result, we don’t play as well.

Both players in my example struggled after having had some success, not because they weren’t trying, or because they didn’t care. They struggled because they both tried differently than they had tried before. As a player, whenever you find yourself in a tough or stressful situation, fight the temptation to try harder and instead, simply try the same way you always do. As players, you’re always trying your best and working your hardest, so to suddenly tell yourself to try even harder makes you tense and takes you out of your best performance zone.

Likewise, if you face a player or an opponent that you already think is weaker than you, it’s common to feel like you don’t have to give your best effort and again, this takes you out of your best performance zone. Always respect every team you play and every player you face – and talk to yourself in a way that helps you by keeping your effort and performance the same.

Here’s a Self-Talk Checklist for Players to download and use as a guide the next time you find yourself in a tough spot in a game. Laminate it and keep it in your ball bag so you can refer to it during a game whenever you need a little help.

Every pitcher wants to throw faster 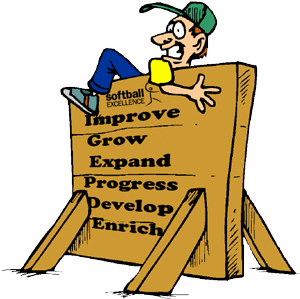 2 Ways to Become a Great Coach!