A Drill for Controlling the Flip Change 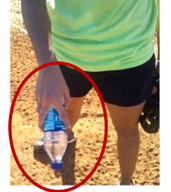 To help your pitcher throw her flip change for a strike, make sure you know this very simple drill.

A change up thrown too high can spell big danger for a pitcher so make sure you know how to use a water bottle to keep the flip change up low in the zone.

The key to throwing a flip change and keeping it low is that the pitcher must flip her fingers out toward the catcher instead of up – which is where most pitchers flip their hands. To help keep the flip going out instead of up the pitcher needs to flip from her wrist instead of from her elbow.

Pitchers can learn how to properly flip from the wrist instead of from the elbow by using an ordinary water bottle. The pitcher simply holds the water bottle between her first two fingers with the opening facing forward (the catcher) as shown in the red circle to the right.

Start this drill with your pitcher in her release position, holding the water bottle between her first 2 fingers. Then have her cock her wrist back titling the water bottle down or backwards. Next have her bring the bottle forward (as if pitching the change up) flipping her wrist and the bottle cap out – or forward – toward the catcher as shown in the CORRECT picture below.

If she flips from her elbow it will cause the cap of the water bottle to point up which would cause the change to go high (INCORRECT). 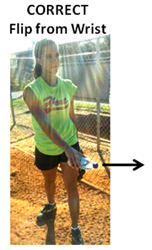 The key to this drill is for the pitcher go through her pitching motion trying to pretend that she’s spraying the water forward onto the catcher by flipping her wrist instead of flipping from her elbow and making the imaginary water go up in the air.

At first the pitcher should do this in slow motion really exaggerating the forward-flip release, all while imagining there’s a small hole in the middle of the bottle cap trying to squirt the catcher with the water instead of spraying the water straight up.

The pitcher won’t actually pitch the water bottle but will simply use it to help her feel the correct wrist flip action when releasing the pitch.

For more pitching help, check out the following:

As a reminder, ALL of these pitching eClinics and eDrills are in the Vault Classic – the best value in softball!

Prev
Does Your Hitter’s Focus Matter?

Does Your Hitter’s Focus Matter?

Are you teaching your hitters the correct type of focus? Make sure you know

Whether you’re practicing indoors or outdoors, here’s a great hitting drill that