Strategy Keys for When to Be Aggressive

Do you know the 7 times when you should and shouldn’t be aggressive?

Whether your team has speed or not, make sure you know when you should and shouldn’t be aggressive.

Many of us think that aggressiveness comes down to how much speed your team has, or whether you’re waving runners around third, but it goes much deeper than that.

There are times for all teams when aggressiveness can be your friend or your enemy. Another way to think about aggressiveness is to think of it as risk. Many factors will determine whether it’s worth the risk to make a strategic move like advancing a runner or trying a lower percentage offensive play.

In general, the strategic factors of risk revolve around the following: 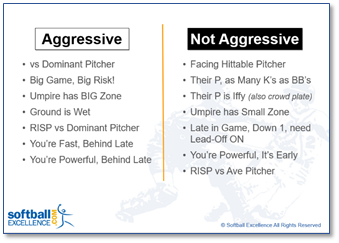 Let’s look a little closer at the times when you should and shouldn’t be aggressive:

For more help with your Strategy decisions, check out the following:

If you’re a Vault Classic member – all of these eClinics are already in your locker. Enjoy!

Breaking out of a slump is tough stuff

Next
A Conditioning Workout to Improve Your Pitcher’s Toughness

A Conditioning Workout to Improve Your Pitcher’s Toughness

If you need to improve your pitching staff’s mental and physical toughness, try