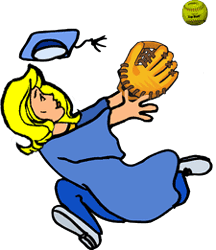 Playing on ESPN sounds very cool, but can your players do it? Discover what it takes to play college softball.

This time of year, playing college softball looks awesome. Heck, if you’re as good as the players you’ll see on TV the next couple of weeks, it is awesome! Playing for a big-time school, with a big-time budget in front of a big-time crowd – what big-time player wouldn’t want that?!

But how many players are really “big-time?” Most players are average. Very few among us will ever be “big-time”. So, the question is, can the majority of your softball players, the ones who are average, can they actually play college softball?

On ballfields across the country parents sign their kids up for softball, many with the goal of their little girl one day playing in college. Playing softball from a young age, simply to play in college is a very slippery slope. There are too many young softball players all wanting the same goal and not enough college softball spots, never mind how long the season is and how hard you’ve got to train to get there. So, can your players make it in college? Can they actually play for their dream school, and if not, then what?

To tackle that question, we’ve got to unravel the most common myths surrounding “playing college softball”. And trust me, these myths have become urban legend.

NCAA DIII programs don’t give out athletic scholarships – in any sport! And yet, they have the most college softball programs with 415. These schools are traditionally academic-focused schools where students depend on their academic scholarships.

The most important thing to remember in the whole “playing college softball” picture, is the word college. The opportunity to go to college and earn a degree while playing the sport that you love is something that very few people get to do. Help your players find the right fit for them, whether it’s at a big-time school everybody’s heard of or at a small school tucked away in the woods.

If your players really want to play college softball, then there’s a program and a level for them. But always remember, they are in school, so grades come first!

And for more help with your Coaching Skills:

Prev
Are You Teaching the Whole Elephant?

Are You Teaching the Whole Elephant?