Pitching Takeaways from the WCWS

With the best pitchers in the country facing off in Oklahoma City, how many different pitches were they throwing? Find out what the best do better.

During the WCWS I tweeted something that got tons of response. So I had to write an article about it.

Starting at a young age, pitchers grow up constantly hearing they need to have more pitches. Coaches and pitchers get obsessed with adding pitches, as if the one with the most wins. And, while I’ve had pitchers tell me they have 7 different pitches, the only ones I’m aware of are; the rise, the curve, the drop, the screw, the changeup and an off-speed version of one of these.

The best pitchers at the Women’s College World Series only threw a few of these pitches, but they threw them well. So, let’s check out my tweet (@cindybristow), and look at what I’m talking about:

“The pitching takeaway from the #WCWS is you don’t need a ton of different pitches. Instead, you need a few pitches you can throw to either edge and a great change.”

One of the most successful pitchers in post-season history is Paige Parker from Oklahoma. In fact, this 2-time national champion suffered the first post season loss in her career this year. As a senior! 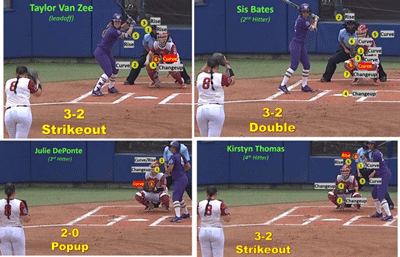 So, let’s look at how Paige threw to Washington’s first 4 hitters, and just how many different pitches this 4-time All-American, and 2-time National Champion uses when it matters most:

To start the game, Parker threw to Washington’s top 4 batters, getting 2 strikeouts, 1 popup and one double. Out of a total of 23 pitches, Paige Parker threw:

As one of the best college pitchers to ever play at the WCWS, Paige Parker only uses 3 different pitches, but she uses them to cover all 4 parts of the zone: up and down, as well as in and out. And, just as importantly, she throws at least 1 changeup to every hitter, which really makes hitters struggle squaring her up.

What Paige Parker does have is the ability to reliably change speeds, and to use 2 speed pitches with precision to attack all 4 sides of the plate. Parker can throw her curveball for a strike to either side of the plate with either a righty or a lefty up – something many pitchers cannot do with her precision. And, her riseball and changeup serve to stretch the zone up, in the case of the riseball, and stretch the batter’s timing, in the case of the change.

Now let’s look at the USA Softball Player of the Year, Rachel Garcia from UCLA. She’s a totally different type of pitcher than Paige Parker. Rachel does throw hard – 70 miles per hour hard – and has 4 different pitchers. But if we take a closer look, we’ll see she doesn’t us all of her pitches equally. 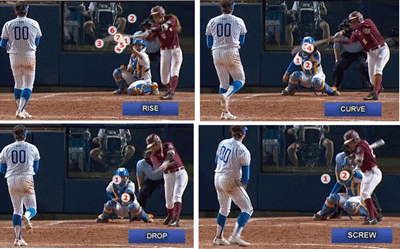 This series of pictures shows Garcia throwing a Rise, Curve, Drop and Screw. She clearly favors her riseball and only uses her screwball and dropball as setup pitches for the curve and the rise. Which means her dropball is a great way for her to lower a batter’s eye level, so she can go back upstairs with her riseball. She uses the screwball to force a batter’s hands to come in tight, so she can bust them outside with her curve.

Both of these great pitchers accomplish the same thing, they just go about it differently.

Here’s my list of pitching takeaways from the WCWS:

For more help with your pitchers, we’ve got you covered:

Not sure what you need, then become a Vault Classic Member and get it all!

Prev
Don’t Be Left Behind – Use What the Best Use

Don’t Be Left Behind – Use What the Best Use

Chase Away the Pitching Demons with this Off-On Pitching Drill