Improve Your Timing with this T Drill

Learning how to swing is one thing but using that swing properly against an oncoming pitch is something totally different.

If you don’t have that expensive batting cage, you can still practice timing with a simple batting T and a protective screen.

This hitting drill is pretty simple when it comes to equipment needed and technical difficulty. But that simplicity doesn’t mean it’s not effective. In fact, this is a great way to help your hitters improve their timing.

Step 1 – To start, you’ll need 2 people (one tossing and one hitting), some balls, a batting T and a protective screen.  The hitter, the batting T and the balls (all but 1) get set up on the hitter’s side of the screen as shown in the Step 1 pictures.

On the other side of the protective screen, the tosser will stand about 3 – 4 feet from the screen, with a ball. The hitter wants to time her movements to the tosser’s, just as she would a real pitcher, so it’s important that the tosser take her time in between each pitch and allow the hitter a chance to get ready. This isn’t a race, so neither the tosser nor the hitter should rush. Quality beats quantity in this drill. 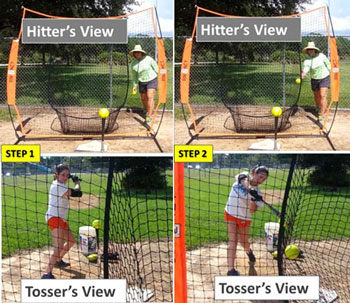 Step 2 – The tosser will either toss or pitch the ball into the net. As the ball hits the net, the hitter hits the ball off the T – making sure to time her swing with the ball getting to her contact point.

This drill is an easy way to help your hitters improve their swing and their timing while using a batting T.

Just make sure your tosser stays behind the net so she doesn’t get hit by the ball.

For more help with this topic check out the following:

Next
Softball Players #2 in Clinical Depression Among Division I Athletes

Softball Players #2 in Clinical Depression Among Division I Athletes

Playing college softball seems to be every young player’s dream, and yet we’re