Hitters – Can You Handle the Red?

While the swing is physical, being a good hitter over the course of a season is mental. The greatest question you can ask your hitters is – can they handle the Red?

Most of us would be thrilled if our hitters hit .352 for the season, but are you preparing your hitters to handle the Red?

During our recent Hitting Summit, Matt Meuchel, Assistant Coach for University of Arkansas Softball presented his favorite hitting chart – and to me, it was eye-opening. Matt’s a super-smart guy and lives in the Sybermetrics world of numbers.

Matt started his presentation asking one simple question…”How many consecutive at-bat’s would you have to make an out in before you’re in a slump?”

Seems like a simple question, but your players (and you as well) will have lots of different answers. So, to visually show how mentally difficult hitting is, Matt created a spread sheet that replicated a typical college softball season. It had 11 weeks going across and 15 at-bats per week going top to bottom.

Matt plugged in a batting average that all of us would agree is pretty high (.352), and visually showed how a .352 hitter goes through lots of ups and downs in their weekly batting average, and how many red zones they go through. 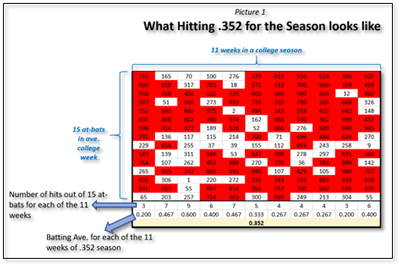 By looking at the spreadsheet in Picture 1 you can see along the bottom how this .352 hitter goes through weeks hitting lower than .352 and higher than .352. Until I saw this up on the screen, I had NEVER thought of a batting average in these terms! What amounts to an extremely high batting average for the year (.352 would put this hitter in the top % of college hitters), takes its dips and dives throughout the season.

When you look closer at this chart (Picture 2) you can see 2 spots in particular where both the player and the coach need to be patient: 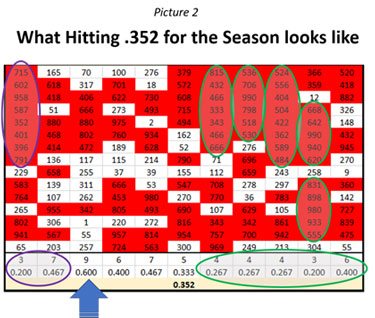 The last thing to look at from Picture 2 is the Big Blue arrow showing week 3. In this week she hit .600 – which seems incredible! And yet, that high of a batting average still includes 5 consecutive at-bats that resulted in outs!

Base hits and outs don’t just alternate themselves, they happen in bunches, and those bunches usually involve lots of Red – or outs! We can tell our players this, but actually showing them what that looks like can help them stay calm. That way the next time think they’re in a slump they can remember, that as long as they keep taking good swings at good pitches – they’re simply going through the Red. Teach your hitters to handle the Red!

Become a member of our Hitting Summit Vault and see everything I learned from the 2017 Hitting Summit. If you want to know what these great hitting coaches teach about hitting, then become a Hitting Vault member today!

If you’re an over-achiever – then get BOTH the Hitting and the Pitching Summit Vault by becoming a Combo Summit Vault member!