3 Ways to Win the Close Ones

Even with incredible pitching, tight games will come down to a single play resulting in the difference of a single run. Is your defense ready?

Check out 3 ways to improve your defense and win more close games.

When your defense boots a ball, it’s easy to pass blame on the offending player, or even on the pitcher for letting the ball get hit (the nerve of her). And yet, when you peel the layers back and take a closer look into botched plays, you’ll often find that players often had to rush their play.

The majority of the time players rush because the batter/runner was faster than they thought, or the ball wasn’t. Reading a batter or runner’s speed is simply a matter of paying attention and scouting. While reading the speed of the ball is the ultimate determination in where the fielder makes the play, controlling that speed is literally out of the player’s hands, but reading it correctly isn’t. She can control how closely she pays attention to the speed of the ball.

And where she positions herself is under her control as well – or at least under someone’s control. Simply starting in position to make the “most likely play” is putting your defense one step closer to making it successfully.

The basic concept of all team defenses is to take away the opponent’s strength, based on the situation. In other words, take away the thing “most likely” to happen.  But keep in mind, to take something away by being strong in one area, you leave yourself weak in another area. 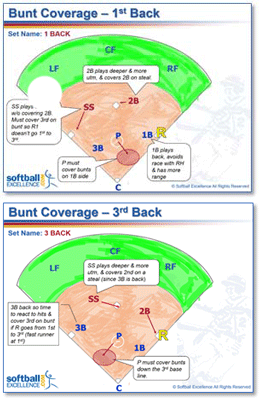 Let’s explore this concept more by looking at the 3 Ways to Win the Close Ones by improving your team defense:

Lesson: Use the coverage that works best for the speed of YOUR 1st baseman, instead of the coverage your favorite college teams uses on TV.

Lesson: Your defensive coverage is only half of the picture. Your pitcher must throw to a location that makes it more likely the hitter will hit into your coverage. That’s why the coach calling pitches needs to sit next to the coach positioning the defense – to be effective they must work in tandem.

So, the third key to your team defense helping you win close games, is to eliminate the Bloop Zone by training your Shortstop and 2nd baseman to play behind them! The farther behind them they’re able to play, the farther back your outfielders can safely move – thus giving them more range to cut off hard hits in the gap.

The increase is hitting skills and bat technology has resulted in more players hitting the ball hard. This forces our outfielders to play back farther, only creating a larger area in front of them – which is the Bloop Zone. Practice diligently with your SS and 2nd base to pursue every flyball behind them in the Bloop Zone, and to expect to catch it as soon as they see the ball headed for that zone.

Lesson:  Middle infielders must be fast. They’ve got to play in front, beside and BEHIND them to ensure bloop singles become outs, less runners end up on base, and your team successfully navigates those 1 run ballgames.

Remember coaches – calling out a team defensive coverage from the dugout is COMPLETELY different from your team having spent time practicing that defense!

Speaking of coverage – we’ve got 3 eClinics that detail all the various defensive coverages:

And Vault Classic Members – these are already in Your Account, so check them out! (not a Vault Classic member – if you’re tired of buying things individually, then join today!)

Next
4 Keys for Your Next Mound Visit

4 Keys for Your Next Mound Visit

Are you going out to the mound too early, or wondering what to say when you get