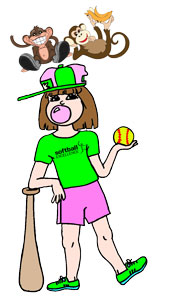 How we think plays a HUGE role in how we play. Discover the role that monkeys play in our success.

Having monkey-thoughts can destroy your performance so make sure you know how to avoid them.

Monkeys are extremely annoying creatures. They make lots of noise, are very disruptive, are constantly taking things and generally require a lot of attention.

Monkeys are very much like our thoughts – the more we have the worse it gets.

Now imagine that for every negative thought you had an actual monkey would appear on your head. One monkey would be bad enough, but after 3 or 4 you’d be a complete mess.

Negative thoughts come with emotions, and emotions are very powerful things to us. We attach memories to emotions, which means we can feel them deeper. And, negative emotions are the strongest of all so those feel bigger and stay with us longer!

Think about how many negative thoughts your players have swirling around in their heads. These thoughts can come from outsiders like parents or coaches or fans (or social media), as well as from within their own heads through self-criticism. It doesn’t take long, and our players are covered in monkeys!!  It’s a wonder that any of them can successfully perform at all!

The more negative thoughts and emotions we have the more monkeys we pile on top of our own heads. And, remember, monkeys are extremely distracting, disruptive and not helpful!

The next time your players get frustrated, help them to immediately think “Don’t Add a Monkey!”. So instead of thinking a monkey-thought – which is a critical or negative thought –instead, think about a solution. Teach your players how to solve the problem instead of reviewing how bad they think they are, or how they’re letting their team down, or asking themselves “what’s wrong with me?”. These are all monkey-thoughts, and each one adds another monkey to their head, and makes it even harder for them to do well on the next play.

Monkeys might look cute on TV, but they don’t belong on your head. Say NO to negative, critical monkey-thoughts and instead, breathe, stay calm and tell yourself a solution thought. Don’t add another Monkey!!

For more help with your Confidence, Self-Image or Team Chemistry, check out:

Breaking out of a slump is tough stuff