You’re in the busiest recruiting time of the year, out looking for kids that will be the future of your program. But are you making sure they’ll fit through your funnel?

Do you even have a funnel? If not, you could be in trouble and your team could fall apart. Here’s how to let your culture help your recruiting.

Too often when we’re out recruiting, we fall in love with the really talented players, the ones with the shiny paint jobs. They pitch really fast, run like the wind or hit the ball a mile every time they swing, so who wouldn’t want them? The answer might be You!

Deciding which players to bring into your program is without a doubt the most important decision you make every year as a coach. It’s more important than deciding to bunt or hit and run in your championship game. More important than who your starting pitcher will be, or when to make a pitching change. We go to classes, read books and struggle over how to better make those decisions, and yet the players we have in our program are the ones that must actually carry out these grand plans.

Sure, they can hit, but can they hit 7th in your lineup without turning toxic and bring down half your team? Yes, they pitch in the upper 60’s, but will their presence on the team make everyone around them better, or will their little personal pitty party eventually involve their parents and wind up in your AD’s office?

These are just some of the questions you should ask before you even think about adding a player to your team! 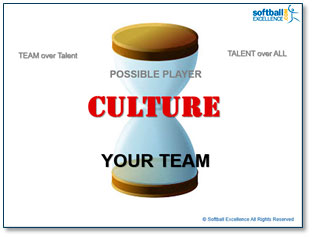 As I explain in our brand new eClinic on Team Culture: “Better People Make Better Teammates” so you need to be evaluating a player’s teammate abilities just as harshly as you’re judging her softball skills.

Create a choke-point, or funnel, through which every player you recruit must pass. This funnel is skinny and extremely difficult to get through by-design. Most players won’t make it through, but then, most players won’t make your team better. Contributing to the greater good, accepting your role, being coachable, and doing all the work required of you are the hidden skills that get over-shadowed by the shinny paint job called speed, or power or strength.

Don’t fall for it. The people you bring into your program must fit together like a puzzle in order to create a culture of success. Once you’ve created the culture you want, you better guard your culture with your life – it’s the key to your success!

To create a “winning” culture look at the physical skills second, and the person and teammate skills first. You need willing and able players, people who are grateful for the opportunity, moldable role players, and generally good people. Start to create stronger detection skills in yourself so you can only pass through your funnel, those players who fit these qualities. If you look at the shiny paint-job skills first, then you’ll jam through some sketchy people-skills that will eventually destroy your team. Don’t do it – it isn’t worth it!

If you’re looking for more details on this topic, and on Creating a Strong Team Culture, then check out my brand-new eClinic: TEAM CULTURE: The Key to Your Team’s Success.

Except for your pitcher and catcher, your middle infield has the most

Next
How to Get More Tag Outs

How to Get More Tag Outs