Bunt Coverage – Are You Sure Who Goes Where? 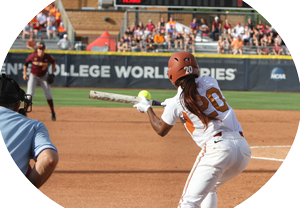 Your players practice throwing and fielding properly, but when that bunt goes down, do they have a clue who goes where? Who covers 3rd when the runner’s fast – make sure your team knows!

Bunt defense matters when the game’s on the line – and often your season with it. Make sure your team’s properly prepared!

Bunting will happen in one or both of the following situations:

In either scenario, championship play or playing behind a great pitcher, your team’s ability to handle the bunt will determine your ability to win. It’s that simple.

If we look at bunt defense, at its core it’s pretty simple; get in the proper position, field the ball, throw the ball and get into another important position. But we all know simple doesn’t mean easy, and these four things can get pretty messed up.

So let’s take the issue of “who covers 3rd base on a bunt”, and see what we can learn. I know that many coaches will have their Leftfielder cover 3rd base, but I want to give you 4 reasons why this isn’t a good idea:

Now not all 4 will be in place on every bunt, but it’s best to have an infielder cover 3rd if for no other reason than infielders are used to making tags around bases, while outfielders are not.

The key for your bunt coverage is this: 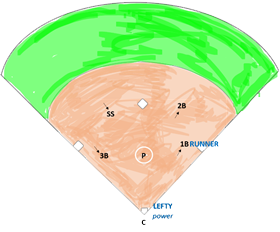 Your starting defensive position, prior to the bunt (called a “Set”) also determines which infielder will likely be in best position to make the play on the bunt. For instance – there’s lefty power hitter up that you aren’t sure will bunt, so you’ll need to play your 1B back in case she hits away, which means your P and 3B will have to cover all bunts. (picture to the right)

The opposite is also true. If a Righty with power who might bunt is up, then your 3B will have to play back in case she hits, and then P and 1B will have to take all bunts.

And here’s the situation that’s the trickiest….the runner on first is super-fast, and the offense bunts to the 3rd baseman on purpose. This means she’s got to first field the bunt and make the throw, before she can hustle back to cover 3rd base – but in the meantime, the Runner at first never even slowed down at 2nd in her attempt to take 3rd on the bunt!

Practice for all types of runner speeds, and defensive coverages…your season just might depend on it!

If this seems new to you, don’t worry – we’ve got you covered! We’ve got some great eClinics that detail all types of defensive coverages.

Next
How a Trashcan Will Improve Your Defense

How a Trashcan Will Improve Your Defense

Discover how the lowly trashcan will improve your defense, by helping to create