If you could make 1 simple adjustment to your hitters to give them more power would you do it?

Of course you would, so check out how … 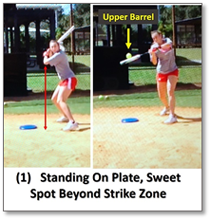 If your players struggle to hit the ball powerfully, and yet they’re strong and have good technique, then they might simply be using the wrong part of their bat.

Here’s what I mean. Bats are very high-tech pieces of equipment, and all that money and technology goes into creating a powerful “sweet spot”. In other words, that part of the barrel where the highest performance of the bat lives. Hit a ball there, and you’ll hit it hard, but miss that part of the bat, and you’re losing a ton of the bat’s power.

I ask players if they’d hit with a bat from Walmart, and most say “no way”. It just wouldn’t be any good. But that’s what you’re doing when you hit a ball too far up the barrel – you’re using the Walmart part of the bat.

Like the hitter in picture (1), I see too many hitters starting too close to homeplate. This causes them to hit the ball with the upper barrel Walmart part of the bat instead of the high-tech sweet spot. They also miss out on hitting balls far because the jam themselves by being so close to the plate. 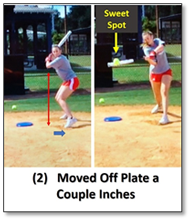 To help your hitters blast more balls, have them move back, away from the plate an inch or two – as in picture (2) – and then see what happens. I’ll bet you’re both surprised how the same swing results in a lot more power and explosion off the bat!

For more help with your team’s hitting, check out our:

Prev
Are Your Second Base Lead Offs Costing You Runs?

Are Your Second Base Lead Offs Costing You Runs?

Does your team struggle scoring once your runners reach second?