Except for your pitcher and catcher, your middle infield has the most influential impact on the outcome of your games. Could yours stand to get better? If so, then you’ll want to check out how.

Beyond simply fielding groundballs, your shortstop and secondbase are involved in tons of plays that directly impact the outcome of your games, and yet too often, we don’t help these players improve these seldom-used but highly impactful skills. Sure, we hit them tons of groundballs, and maybe ask them to turn a few double plays, but beyond that, what more can you do? You either have great middle infielders, or you don’t. Right?!

Not even close. Just like every other position on your softball team your middle infielders can tremendously improve with some very specific work. We’ve seem some incredible middle infield play in this year’s college softball playoffs. From diving stops to glove flips to double plays, the middle infielders have been brilliant! 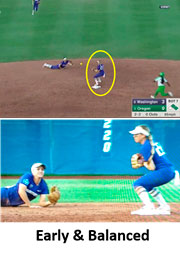 If you need a refresher course on double play footwork for both the shortstop as well as the secondbase player, I go into detail about it in our eSkill 032: Fielding – Level 4.

While it’s easy to watch the incredible athletes competing in this year’s Women’s College World Series and think there’s no way your players could do those things, when you actually break down the skills, their parts are very doable, and very teachable. Great middle infield play looks incredible, is momentum stopping, and most importantly, is teachable!

For more help teaching your middle infielders, check out the following:

Next
Are You Recruiting Players that Fit Through Your Funnel?

You’re in the busiest recruiting time of the year, out looking for kids that