How to Get More Tag Outs

Tagging runners out might seem like it has everything to do with the throw. But, you might be surprised to learn there’s a secret in how you make the tag.

There’s actually an art to the way your infielders receive a throw when they’re trying to tag out a runner –this knowledge can mean the difference between safe and Out!

When you’re an infielder at a base waiting to tag out the runner whose either diving back into the base or coming from another base, what you do on your end of the tag is just as important as the accuracy of the throw! 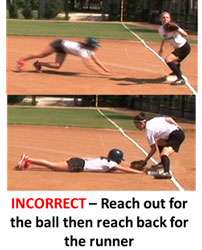 Most of us reach out for the ball and then sweep back and tag the runner. And, while it’s human nature to go out and get the ball, you might be surprised to learn that it’s actually slower! True! The ball moves through the air faster than your hands do, so if you keep your glove near the base where the runner is going and let the ball come to you – it’s FASTER than if you reach out to catch the ball and then bring the ball back to tag the runner. And, when trying to tag out a fast runner, faster matters!

The 2 pictures to the right show the 1st baseman set up to receive a throw (top picture) and then reaching back to make the tag. The tag is late and the runner is safe, because this player reached out to get the ball instead of letting the ball come to her.

While letting the ball come to you isn’t the “normal” thing to do since human nature makes you want to hurry up and get the thing you need (the ball) to do the thing you’re trying to do (tag out the runner). But, sometimes, human nature is wrong. 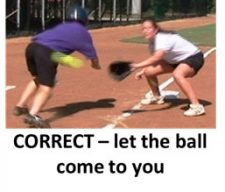 As you can see in the picture to the left, the fielder keeps her glove close to her and lets the ball do the travelling. Balls move much faster through the air than hands and gloves do so let the ball do the traveling and you do the tagging. It will make for lots more outs – but since it isn’t human nature, you’re going to have to practice it!

For more help with your fielding, check out the following:

Prev
Are You Recruiting Players that Fit Through Your Funnel?

You’re in the busiest recruiting time of the year, out looking for kids that

To help your hitters get into the proper Stance with their feet, have them put