Championship Lessons from the Houston Astros 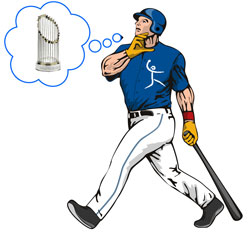 Life wasn’t always so good for the Astros. Discover some championship lessons you can learn from their journey to the top.

When a team wins a championship, in any sport, life is good – really good. But, pull back the layers and underneath all the celebrating, the trophies and the rings are some struggles and lessons that can help all of us.

While the celebrating is easy, the winning is an entirely different story. Winning takes time, it takes patience, and oddly enough, it takes losing. Read on to discover some championship lessons from the World Champion Houston Astros!

But for all their focus on numbers, the Astros realized there was a disconnect. They were seeing players as numbers instead of people. Baseball is a game ultimately played by people, and in order to be really good, their main focus had to be placed on each one of their players. So, they made some shifts. They brought in 3 veterans who knew they wouldn’t play a lot, but whose leadership would help guide the younger stars through the playoffs. Other players learned Spanish to help clubhouse communication, and the analytics department and coaching staff realized they had to tell players the “whys” behind all their numbers and shifts.

Seemingly little things that when combined put the Astros focus on their culture and the makeup of their players, instead of simply on the dry, human-less numbers. The Astros championship reminds us that we coach people who play softball or baseball. Reach the hearts of those people, and you can achieve some magical things!

But inside the Astros, during those dreadful years, they knew they were slowly, quietly re-building from the ground up. In fact, they put a sign out in front of their ballpark that read “QUIET! WE’RE SUCKING TO GET BETTER”. While it’s not a message people have the patience to hear, it’s what all championships require. It takes time, it takes horrible and it takes patience to go from being 45 games out of first place to being World Series Champions!

Congratulations Astros – it was a joy to watch you play!

For more help creating your team’s championship culture check out our eClinic:

If you’re a Vault Classic member, then this eClinic is already in your locker! Check it out now.

Next
Be a Better Hitter with One Simple Change