The Power of Tradition - Great Lessons from Down Under

Go along with me on another great trip to Australia that this time took me to Sydney, Melbourne and Darwin. PrintFriendly
byCindy Bristow
Total
0
Shares
0
0
0 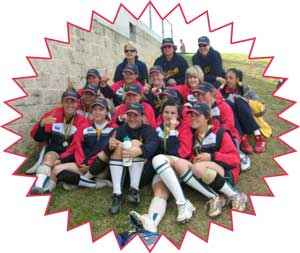 Softball in Australia is getting better all the time as evidenced by their yearly Friendship Series, an event where Softball Australia brings in their top 30 16 and Under players to the 2000 Olympic Softball venue in Blacktown, Australia located about 40 miles outside of Sydney.

They bring in their thirty best 16 & Under girls and boys players along with their top coaches and give them a few days of training followed by a few days of games. To these young athletes this is their very first exposure to being a part of an Australian National Softball Team so in many regards it’s a BIG learning experience. I’d like to thank Chet Gray and Softball Australia for their foresight in creating this great program and for inviting me to be a small part of it!

The Power of Tradition – What I really love about this program is not only are these players exposed to different methods of coaching and training through the first few days of this camp, but they are also exposed to what it means to represent their country. There is a small ceremony when training camp ends where a current or former national team member actually presents the jersey to each of these 30 players followed by a little speech about what it meant to them to represent Australia. 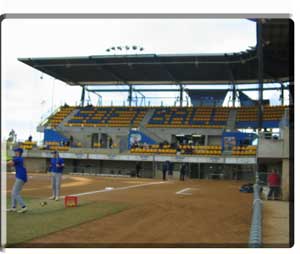 So for instance, from the 2008 Australian Olympic Softball Team there are 3 players who have played in all 4 Olympic Games. And while that in itself is an amazing accomplishment (in contrast the USA only had 1 player to play in all 4 Olympic Games – Laura Berg), these players still have 2 very important numbers listed beside their names whenever they are mentioned: (1) their selection number – where they were selected in the long list of players that have made the Australian Women’s National Team, and (2) the number of international competitions in which they’ve represented Australia.

(1) Natalie Ward is #175 which means she is the 175th woman ever to make the Australian Women’s National Softball Team. Tanya Harding is #166 and Melanie Ward is #148. And while all 3 of these women are 4-time Olympians and 4 time-Olympic medalists, that number keeps them grounded. It keeps them from thinking that the whole national team started when they joined it. It simply shows these players that they are a part of a tradition which is a tremendous lesson for so many of our young players to learn.

(2) Australia also lists the number of international competitions each player has played for their country, and again, it’s just a way of showing how much you have given on the softball field and that the whole concept of “a national team is bigger than any one individual that’s on it“.

You might think about how you could start to create a tradition within your program to not only honor all of those who have already been a part of it, but to give those coming into your program a better idea about what they’re about to become a part of! 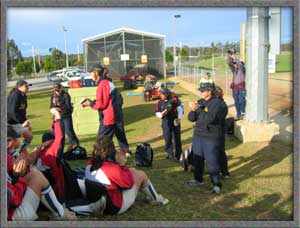 New South Wales, Victoria and Northern Territories – I absolutely LOVE the Australian people and their beautiful country, this trip I was fortunate to see more of it. In all my past trips I’ve always stayed in or near Sydney, and while it’s a wonderful city I was excited this time to see much more.

The New South Wales Softball Association – I’d like to thank Cathy Kerr and everyone who works with her for all their hard work in making the Friendship Series possible. To say that they work long and hard hours would be an understatement and I am grateful for all they do for softball in NSW! The coaching and pitching clinics we held there were really well attended by very eager coaches and players! Oh, and their coaches are TOUGH as one night we held a clinic and it was only 41 degrees – I was the first one to yell “uncle”!

The Victoria Softball Association – After leaving Blacktown I was off to Melbourne to hold some coaching, pitching and hitting clinics in Victoria. The Waverly Softball Association hosted these clinics at their beautiful complex in Glen Waverly and again, all of these clinics were very well attended. I would really like to thank Jo and Kylie who went out of their way to make sure I got to see an Aussie Rules Footie Game in person – Hawthorn vs. Collingsworth at the Melbourne Cricket Grounds (MCG) – GREAT fun! The Hawks won! (Hawthorn)

The Northern Territories Softball Association – Then I was off to Darwin and the top of Australia. While it’s winter in Australia you wouldn’t know it in Darwin. I felt like I was home in Florida. Darwin is very near the equator and tropical. Plus it had a lot of that laid-back atmosphere I was used to growing up in Southern California. We held 2 very successful coaching clinics in Darwin where they have far more distance than people and, might have more crocodiles than either one! Chris and Sonjya were fantastic hosts and even let me drive while I was there. Might not sound like much except that they drive on the opposite side of the car and the road…I was doing pretty good until I forgot to look right as I was crossing the busiest street in Darwin, at rush hour. Fortunately for me the other cars saw me and stopped as I sure didn’t see them… Next time I’ll stick to softball and leave the driving to the locals.

Check out my pictures from my trip Down Under in our Field of Fotos on the Softball Excellence Dugout.

Also, for tips and ideas on building team unity take a look at our Coach’s Guide to Creating Team Chemistry: Tips on Coaching Female Athletes

Some great ideas and suggestions of how to watch the competition, who to look

Next
Coaching Certification Up Close – Level 1

Is SE Certification Training Level 1 the answer to your coaching needs?