Learn about another very rare Olympic 4-timer with a drawer full of medals, a World Series ring, and on top of all that…she's a Mom! PrintFriendly
byCindy Bristow
Total
0
Shares
0
0
0 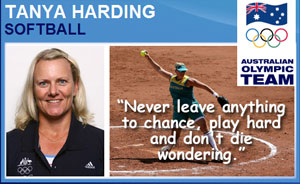 If you’ve grown up watching the Olympics and admiring Olympians then you can’t wait for August to get here. Every 4 years only 15 fortunate and extremely talented softball players from 8 nations get to represent their country. Most of those 15 are first-time Olympians, a few are repeat Olympians but only a very, very rare bread will be what we call 4-timers – those players who will be competing in their 4th Olympic Games in August in Beijing.

Last issue we talked about US Olympian Laura Berg, and today we’ll be looking at Tanya Harding, a 4-timer from Australia and one of the best softball pitchers in the world.

Tanya also appears on the cover of our pitching book – The Complete Book of Pitching.

Ever dream about being in the Olympics - Who hasn't? But do you

Next
Softball Down Under

Think you know what softball looks like Down Under? Check out the sights