Most of us enjoy watching softball on TV anytime we can and since I’m fortunate enough to get behind the scenes I wanted to take you with me and show you what’s involved when ESPN televises a softball game. 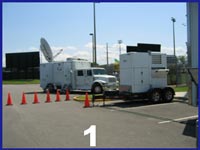 Putting a softball game, or any sport, on tv is no easy undertaking. It takes lots of trucks, people, cameras, cables and time. Let’s take a look at some of what’s behind the scenes when you sit in your living room and watch a 2:00pm softball game on tv.

Even though the game might be scheduled to start at 2:00 in the afternoon, the crew gets to the ballpark at 6:00am. This crew includes close to 30 people that will meet the production truck, the satellite uplink truck and the portable generator as they also descend on the park at 6:00am. The hard-working crew then starts laying miles of cables in order to set up the 5-8 camera’s usually required to shoot a softball game, cover the cables so no spectators trip on them (as most are laid in and around the stands), and setup all the monitors and microphones needed to conduct the broadcast (pictures 1 & 2).

They’ll put up any protection or padding that might be necessary to keep balls from hitting any cameramen/women as 1-2 camera’s are usually on the field level (low 1st and low 3rd camera), (picture 3) and will also climb and attach any fence camera’s that might be needed in order to shoot the scoreboard or get a view from high above homeplate (called high-home).

As announcers, we arrive at the field about 2 ½ to 2 hours before game time and then begin our pre-game prep. By the time we get to the field we’ve both already interviewed each coach (usually via phone), read through both schools media guides, churned through what seems like hundreds of pages of stats and boiled it all down to nuggets that will fit on 4 x 6 cards for each player. 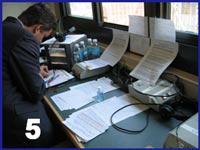 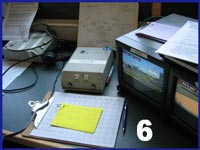 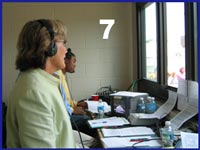 The actual game goes very fast and you never really know what things you’ll be talking about, how much time you’ll have to interject stories or backup information or stats that might be relevant. As the Women’s College World Series draws near more and more softball will be on tv in the form of the Regionals and Super Regionals. The next time you watch a game you’ll be a little more informed as to what’s going on to make it possible. And there you have it – life behind the scenes of a televised softball game.

Prev
Pennsylvania On Board

10 Things I Learned from the 2008 Women's College World Series