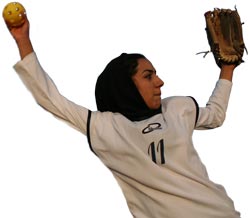 Even the title sounds hard to believe – Softball in Iran! But you may be surprised just what inroads are being made in a country not known for equality for women, let alone for playing softball.

Softball’s an extremely popular sport here in the US and one that’s growing all the time, but have you ever thought about softball in Iran? Not many of us have. In fact, when most of us think about Iran we’re not sure what to think as it’s a country located in a part of the world not known for women’s rights much less softball.

But, thanks to one very hard-working and enthusiastic woman, softball now exists in Iran! Sarah Hillyer is pursuing a PhD in Sports Studies at the University of Tennessee and has 14 years of experience as an international women’s sport development expert working with Global Sports Partners.

Hillyer is busy continuing to teach Iranian women how to play the sport of fastpitch softball. Keep in mind that Muslim women, according to their faith, must be completely covered when they do anything outside of their home – this includes playing softball. So when Hillyer first introduced softball in Iran in the winter of 2002 at the request of the Islamic Federation of Women’s Sports (IFWS), it was to fully, burka-covered Iranian women. The IFWS has made a strong commitment to sport development and participation for not only Iranian women, but Muslim women around the world as well.

Hillyer has worked with nearly 100 new softball players in the Iranian cities of Tehran, Mashad, Kerman, and Bushere. The training courses were designed to certify the first generation of women’s softball players, coaches and umpires in Iran. Although it is forbidden for men to coach women, Iran has relied heavily upon the relatively more experienced baseball players to serve as coaches for the growing women’s sport of fastpitch softball.

In my work with the International Softball Federation I was fortunate to travel to many wonderful countries and to work with lots of terrific people. Sarah and was one of the people I was fortunate to work with as the ISF was able to help her in regards to providing equipment for the Iran Softball Project. Softball takes a lot of equipment that in other parts of the world isn’t as easy to get as it is here in the United States and providing that equipment is just one of the many things the ISF does on behalf of softball world-wide.

Sports is a universal language and in today’s day and age with tensions high in various parts of the world, Global Sports Partners counts it a privilege as well as a responsibility to encourage peace by using sport, specifically fastpitch softball.

There are some exciting programs on the horizon for both Sarah and for Global Sports Partners. They are hosting the first ever “Friendship Cup Softball Tournament” to be held in Istanbul, Turkey in July and August of 2007. GSP will play host to two Turkish teams that Hillyer and colleague Rainey Johns trained from the teams’ inception, and a team from Iran that Hillyer and Canadian pitcher Alissa Baxter and Kentucky resident Angel Pigg trained in 2007 and 2002 respectively. GSP is fielding a volunteer team from the USA to take part in the tournament. Following the 5-day tournament GSP will host additional coaching and umpiring training courses for Muslim women from the Middle East.

Check out our Field of Foto’s section of the Dugout to find pictures of Sarah and the Iranian softball players along with other softball pictures from around the world. In future issues I’ll be sharing stories about softball different countries in an effort for all of us to see just how global our sport really is.

Prev
Where’s Everybody Supposed to Go When they Bunt the Ball??

Where’s Everybody Supposed to Go When they Bunt the Ball??

Some recent coaching clinics in some wonderful places like Portland, Anchorage