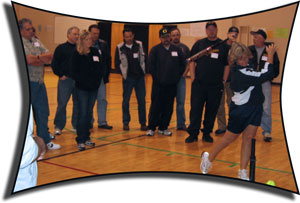 My thanks to all the coaches that attended the coaching clinics we conducted over the past few weeks. We all had a great time, learned lots and enjoyed some wonderful locations in the process!

First stop – Portland, Oregon! Oregon ASA in cooperation with Softball Excellence conducted 2 one-day coaching clinics for coaches from all over Oregon to get their Softball Excellence-Oregon ASA Coaching Certifications. We covered the fundamentals of skills like throwing, fielding, hitting, pitching, bunting and baserunning along with actually getting the coaches involved in conducting tons of great drills. What a beautiful location with such enthusiastic people! This is going to be a yearly clinic as we’re already making plans for next year. Check out pictures of these coaches in action in the Field of Foto’s area of the Softball Excellence Dugout!

Next Stop – Anchorage, Alaska! I was fortunate to work alongside Margie Wright (Fresno State), Kirk Walker (Oregon State) and Hildred Deese (of the NFCA) as we conducted the first ever Alaskan NFCA Coaching College. We conducted Course 402 – Advanced Skills Analysis; Pitching, Hitting & the Short Game – and had a fantastic time teaching both high school and summerball coaches from all over Alaska. For those of you who have never been to Alaska I highly recommend it as it’s one of the most beautiful states in the US and the Alaskan hospitality is second to none! Check a few pictures from Alaska in the Field of Foto’s area of the Softball Excellence Dugout!

Final Stop – Indianapolis, Indiana! The final clinic stop was the National Sports Pitching Clinic. I was one of the speakers in this pitching-only clinic that explored all facets of pitching from the mechanics of the different pitches to pitch calling, working with catchers, solving pitching problems and dealing with issues like conditioning, attitude and work ethic. This clinic was conducted by National Sports Clinics who has 8 more softball coaching clinics scheduled through February of 2008. If one is scheduled near you I strongly suggest you make plans to attend as I learn something every time I speak at one of these clinics!

Check out our online schedule for other upcoming Softball Excellence Events.

Evolution in a country not known for softball

Next
Playing Nano eDrills on your TV

Playing Nano eDrills on your TV

Detailed instructions for watching all the Softball Excellence eDrills loaded on